The store will not work correctly in the case when cookies are disabled.
Menu

Bayley Hazen Blue is a natural rinded blue veined cheese made from raw milk. Bayley has a fudge-like texture, toasted-nut sweetness, and anise spice character. The paste is dense and creamy, with well-distributed blue veins.
Be the first to review this product
$14.98
Skip to the end of the images gallery 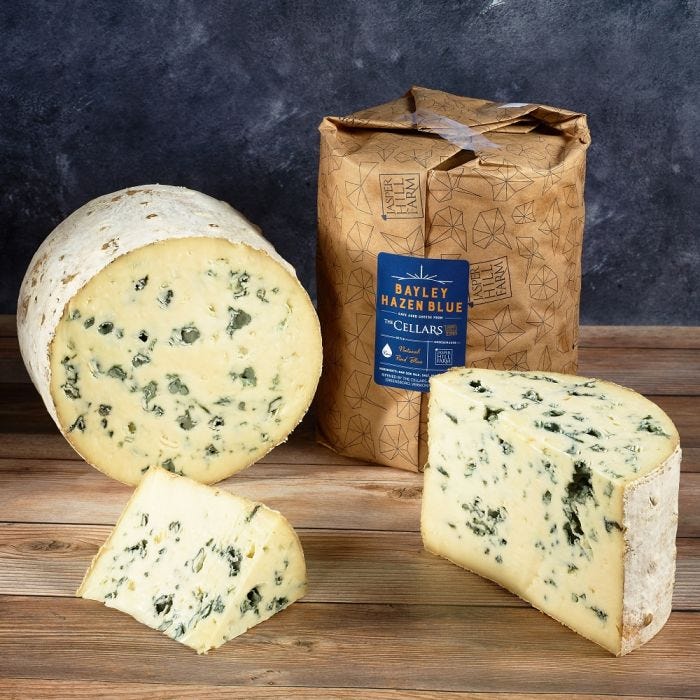 Skip to the beginning of the images gallery
Details

Bayley Hazen Blue is a Jasper Hill Farm original, and is made from whole raw milk. It is named for an old military road commissioned by George Washington during the Revolutionary War. Though no major battle ever took place, the road brought Greensboro its first settlers and continues to be used today.

This Vermont blue cheese has developed a loyal following because of its fudge-like texture, toasted-nut sweetness, and anise spice character. The paste is dense and creamy, with well-distributed blue veins. The usual peppery character of blue cheese is subdued, giving way to the grassy, nutty flavors in the milk.

The texture and flavor makes Bayley Hazen an ideal choice for any lover of blue cheese, but with a balance of flavors that renders it accessible to those new to the style.

Try pairing with a fruity red dessert wine, toasty Imperial Stout, or a hunk of dark chocolate. Bayley Hazen is also ideal for crumbling over a juicy burger or adding to a salad with spinach, walnuts, and dried tart cherries.

More Information
Reviews
Write Your Own Review
Only registered users can write reviews. Please Sign in or create an account
Product Questions
Customer Questions
No Questions
Please, mind that only logged in users can submit questions
More from Jasper Hill
Cheese